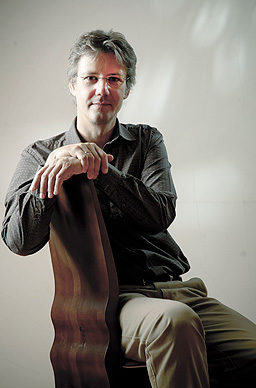 is one of the leading Swiss composers of his generation. His works were premiered by great musicians of our time such as David Zinman, Andris Nelsons, Sir Roger Norrington, Andrey Boreyko, Christopher Hogwood, Steven Isserlis, Dame Evelyn Glennie, Antonio Meneses and Henning Kraggerud, and were heard in the prestigious halls of the world including the Carnegie Hall in New York, the Tonhalle Zurich, the KKL Luzern, St. Petersburg Philharmonic and the Teatro Colón. He got commissions from the Lucerne Festival, the Interlaken Music Festival, Cully Classique or the Vestfold Festspillene in Norway, and his works were performed at the Festival La Chaise Dieux in France, the Aspen Music Festival in Colorado or at the Festival Internacional de Ushuaia in Argentina. Various Portrait CD with the Philharmonia Orchestra London, the Royal Philharmonic Orchestra, the Zurich Chamber Orchestra and the Petersen Quartet Berlin were published.

Fabian Müllers music is created wholly out of an intuitive freedom. His starting point is rarely a concept developed by the intellect for the music to follow. His works thus encompass modernistic and traditional elements. He feels no duty to any particular school or dogma, seeing his composing as a voyage of discovery undertaken by an independent spirit, combining a playful treatment of traditional methods with the unexpected and unforeseen. But Müllers concern is not to conjure up the past in a nostalgic manner; he simply does not wish to see the development of Western music as a one-dimensional continuum from epoch to epoch, with certain stylistic elements now permitted, now not. He rather sees it as a means of treating the totality of possible sounds in a manner that is timeless new.

In December 2021, his opera “Eiger” was premiered, based on a libretto by the Swiss writer Tim Krohn and commissioned by the Biel-Solothurn Theater in Switzerland. A new concertante work was created in 2020 for heckelphone and orchestra.

A concert for pan flute and large orchestra was commissioned by the Südwestdeutsche Philharmonie Konstanz. It was premiered in 2018 with the soloist Urban Frey and conducted by Ari Raisalinen. «Canto» for string orchestra, commissioned by the Zurich Chamber Orchestra and part of the »Oeuvres Suisses»-project of the Swiss Arts Council, was premiered at Tonhalle Zurich in March 2016. «Extempore» (homage to Agnes Martin) for contrabass and vibraphone, written for Dame Evelyn Glennie and Petru Iuga, was premiered at the International Cultural Festival «Resonanzen» (Sils-Maria) by the two musicians in the fall 2015th.

Two major works for cello and orchestra, the «Taiwan Rhapsody» and «Six Taiwanese Songs,» based on folk songs of Taiwan and written for his wife, cellist Pi-Chin Chien, have had its World Premiere in January 2015 (National Taiwan Symphony Orchestra NTSO; Conductor: Wen-Pin Chien). The two works were released with the Royal Philharmonic Orchestra London on CD by Sony Classical.

The String Quartet no. 4 written for the Carmina Quartet was premiered in in the series of «Chamber Music Bern» in December 2014.

Recently written works are also the Concerto for Vibraphone and Orchestra, as well as «Clatterclank» for snare drum and string orchestra for the percussionist Dame Evelyn Glennie. Both works were premiered in the Tonhalle Zurich in fall 2014. The Cello Sonata no. 2 commissioned by Antonio Meneses was premiered at Teatro Amilcare Ponchielli in Cremona.

2012 a new Sonata for viola and piano was premiered on the 40th International Viola Congress in Rochester NY. His recent works also include «Sirimadi» for cello and orchestra, commissioned by the Swiss Embassy in Thailand as a gift for the Thailand Philharmonic Orchestra (TPO) on the 80th anniversary of diplomatic relations between Switzerland and Thailand, as well as «Dialogues Cellestes», a Double Concerto for two cellos and orchestra for the cellists Antonio Meneses and Pi-Chin Chien. «Dialogues Cellestes» was recently recorded on CD (ARS Produktion) together with two other orchestral works, «Eiger» and the «Concerto for Orchestra» played by the Royal Philharmonic Orchestra, London and conducted by Claude Villaret.

Highlights of the last years

2011 Fabian Müller was «composer in residence» of the festival, «Cully Classique“. The festival commissioned a trio for violin, viola and piano, entitled «The Mysterious Mr. Harley Quin `. The work was premiered at the festival and had more performances in Berlin (Philharmonie) and in Paris (Les Invalides).

Commissioned by the Norwegian violinist Henning Kraggerud and the music festival «Vestfold Festspillene» 2010 Fabian Müller wrote a piece for solo violin, «Munch`s Traum(a),» inspired by Edward Munch. The piece is part of a «Munch Suite», to which 15 composers from different countries have contributed. It was released on CD by SIMAX 2013.

2010 he wrote his 2nd String Quartet «The Helvetic» for the Carmina Quartet commissioned by the Swiss Arts Council Pro Helvetia.

Recent works are also the «Concerto per Klee» for cello and chamber orchestra, which was premiered by the cellist Steven Isserlis and the «Weinberger Chamber Orchestra» conducted by Gábor Takács-Nagy, the «Weinberger Divertimento» premiered by the same ensemble as well as the «Concerto for Orchestra» which was presented on a tour throughout Switzerland (season 08/09) with the «Austrian-Hungarian Haydn-Philharmonic Orchestra» conducted by Christopher Hogwood.

«Taranis» (2006) for large orchestra was premiered by the Bern Symphony Orchestra and conductor Dimitrj Liss in the season 08/09 and was on tour in Germany conducted by Andrey Boreyko in spring 2009.

The Cello-Sonata No. 1 composed for his wife the cellist Pi-Chin Chien was premiered together with the pianist Beatrice Long in new Jersey in spring 2006. Another performance took place at October 7th in the Carnegie Hall, New York.

«Balada y Bulerias» for large orchestra was premiered in April 2005 in the Philharmonie St. Petersburg. «Earth in Flames» for four flutes, four basses, xylophone and timpani was premeried in June 2005 in Zurich`s Tonhalle.

«Eiger» for large orchestra was commissioned by and premiered at the «Musik-Festwochen» in Interlaken 2004. Conductor Andris Nelsons led the Latvian National Symphony Orchestra.

In January 2001 the Tonhalle Orchestra premiered the orchestral version of the «Nachtgesänge» with the mezzo-soprano Malena Ernman and the conductor David Zinman. The «Nachtgesänge» were recorded in spring 2001 together with the cello concerto and two other orchestral works by the Philharmonia Orchestra, London conducted by David Zinman and with Malena Ernman, mezzo-soprano and Pi-Chin Chien, cello. This CD was published in January/February 2002 by the German label «col legno».

Fabian Müller began as a cellist (he studied with Claude Starck at the Zurich Conservatory) and has increasingly dedicated his energies to composition. His first composition teacher was Josef Haselbach (Conservatory Zurich). He spent several years at the Aspen Music Festival (Colorado) and studied there with George Tsontakis, Jacob Druckman and Bernard Rands. In 1996 he won the composition prize at the Aspen Music Festival (Jacob Druckman Award for Orchestral Composition). 2006 he received for his work until to date an award from the canton of Zurich. And in 2012 he was awarded the «Zollikon Art Prize». Fabian Müller is one of the nominees for the Swiss Music Award 2016 of the Federal Office for Culture of Switzerland.

Other activities and interests

In addition to his activities as a composer, Fabian Müller is very interested in music ethnology. 2010 he was a visiting professor at the prestigious University in Taiwan, the Taipei National University of Arts with a lecture on the influence of folk music to art music in Europe. On many travels, he deepened his knowledge in this field. He has also been involved with Swiss folk music since childhood, and is acknowledged as one of the prime trailblazers and innovators in this field. He spent ten years (1991 to 2002) preparing the publication of the Hanny Christen Collection, a ten-volume anthology of folk music with over 10000 tunes from the 19th Century, which initiated a new era for the traditional music of his country. He was the founder and director of the Mülirad publishing company (1990-2006, www.muelirad.ch) and initiated the Swiss folk music institute «House of Folk Music» in Altdorf (www.hausdervolksmusik.ch).

From 2009 to 2013 Fabian Müller was artistic co-director of the International Music Festival «Lenzburgiade» at the castle of Lenzburg in Switzerland, and since 2017 he is responsible together with his wife Pi-Chin Chien for the artistic direction of the «Confluence Musikfest» in Zurich.