Works for and with String Orchestra / Zurich Chamber Orchestra 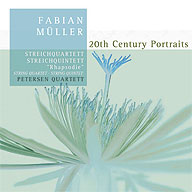 Duo for Violin and Violoncello (2002)

Review by Phillip Scott, Fanfare: Editor Flegler moves in mysterious ways! No sooner did I express an interest in hearing this particular disc than it turned up on my doorstep. I was impressed by a CD of orchestral music by Swiss composer Fabian Müller (b. 1964) and the same composer’s chamber music for strings is even more estimable in a way, because it does not rely on piquant subtleties of orchestral color to make its effect. (Müller is a born orchestrator.) A Fanfare colleague recently wrote of another composer that, being Swiss, he enjoyed the best of both worlds, combining German rigor with French joie de vivre or—if you like—German head and Gallic heart. That is demonstrably the case with Müller. His idiom is unapologetically that of the early 20th century, but it brings together the contrapuntal discipline of Hindemith with the surface beauty of Ravel, the motivic manipulation of Berg with the textural shimmer of Debussy. In the String Quartet’s first movement, the dominant trait is contrapuntal felicity, the raw material being a simple four-note motif that is lightly tossed from one part to another. The second movement, Andante, is the lyrical, emotional core of the work. Müller’s deft hand in scoring is evident in octave doubling between violin and cello; at times this produces an almost Brahmsian richness, yet a rocking accompaniment to a gentle cello theme unmistakably recalls Debussy. A brief, vigorous Intermezzo is succeeded by a boisterous finale that is unlike anything in the quartets of the French or German masters. This movement is in the form of a flamenco dance in 12/8 meter called a buleras . The term seems close to bolero but does not sound it; the rhythmic buleras is more urgent, its spirit earthy, dramatic, and vital. (Müller indulges in flamenco dancing himself from time to time, according to the notes: this movement is his personal homage to that world. He has orchestrated the movement as a dance piece to be performed separately, yet by no means does it feel out of place as the full-blooded conclusion to this quartet.) The String Trio is similarly tightly argued, sharing the Quartet’s overriding characteristics of precision and light-heartedness. Much of it is in 3/4 time and several themes are drawn from Swiss folk music, on which Müller is an authority. Nevertheless, the bright, playful final movement Allegro–Scherzo is very French. The shorter Quintet is predictably darker in texture. A dramatic opening precedes a deft little tune played at first by solo violin but quickly imitated by the other instruments. The Quintet is subtitled “Rhapsodie” and the sectional form reflects this, flowing from the perky main idea into moments of stasis or, conversely, rhythmic punch. Octave doubling is again used to underline a yearning theme that appears out of nowhere in the midst of all the activity (and is nostalgically recalled at the work’s close). The composer controls these subtle but clear shifts of mood throughout the 10-minute piece with a deft hand. The Duo, in five short movements, explores a number of contrasting moods as well, while providing a showpiece for the two soloists. Sound is bright and present and the internal balance from all the various ensembles is impeccable. The Petersen Quartet has made recordings of Schuloff’s and Krenek’s quartets for this company, and this CD is another notable feather in their cap. Cellist Pi-Chin Chien (the composer’s wife) is also a clear asset, particularly in her finely blended duets with Tomasz Tomaszewski. It is undeniable that each of these fine chamber works might have been written some time ago, rather than between 1996 and 2001; yet, maybe it takes a few decades of hindsight to blend musical influences as smoothly as Müller has done. The language may be secondhand to some, but this young composer is very much at home in it and has something to say. Let me confess: I like his music a lot, and I cannot imagine any true music-lover failing to respond to it.